I waited a while before giving a try to Life Is Strange. It’s made by a french studio named DONTNOD Entertainment and, over years, I grew wary of frenchness/ubisoftness in video games: repetitive gameplay with teenager philosophy in disguise of an inconsistent plot.

Plus Life Is Strange is a point-and-click adventure game and, these days, with Telltale Games, the standards are quite high.

Gameplay wise, Life Is Strange forces you to click and move the mouse to a text string like “Do this” to do anything. I guess they thought it would be practical in case there are many actions possible. But in most cases, you actually have one or two possibles actions. And when there are two actions, usually the first one is “Look at” which is utterly useless since you are already looking at the said object. The game is labelled “graphic adventure” but you are forced to focus on some meaningless text strings. It’s not intuitive neither graphical at all for me. 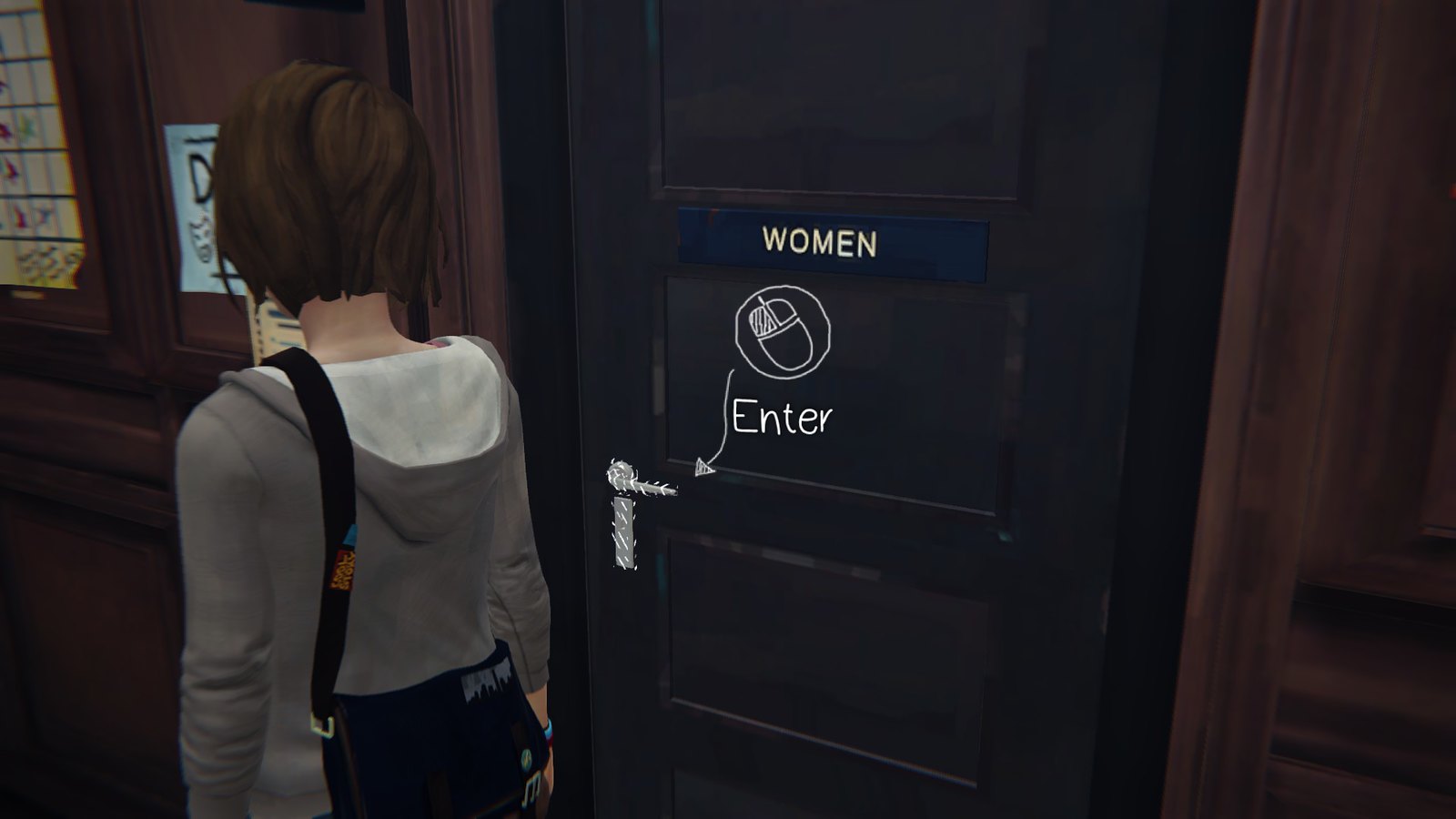 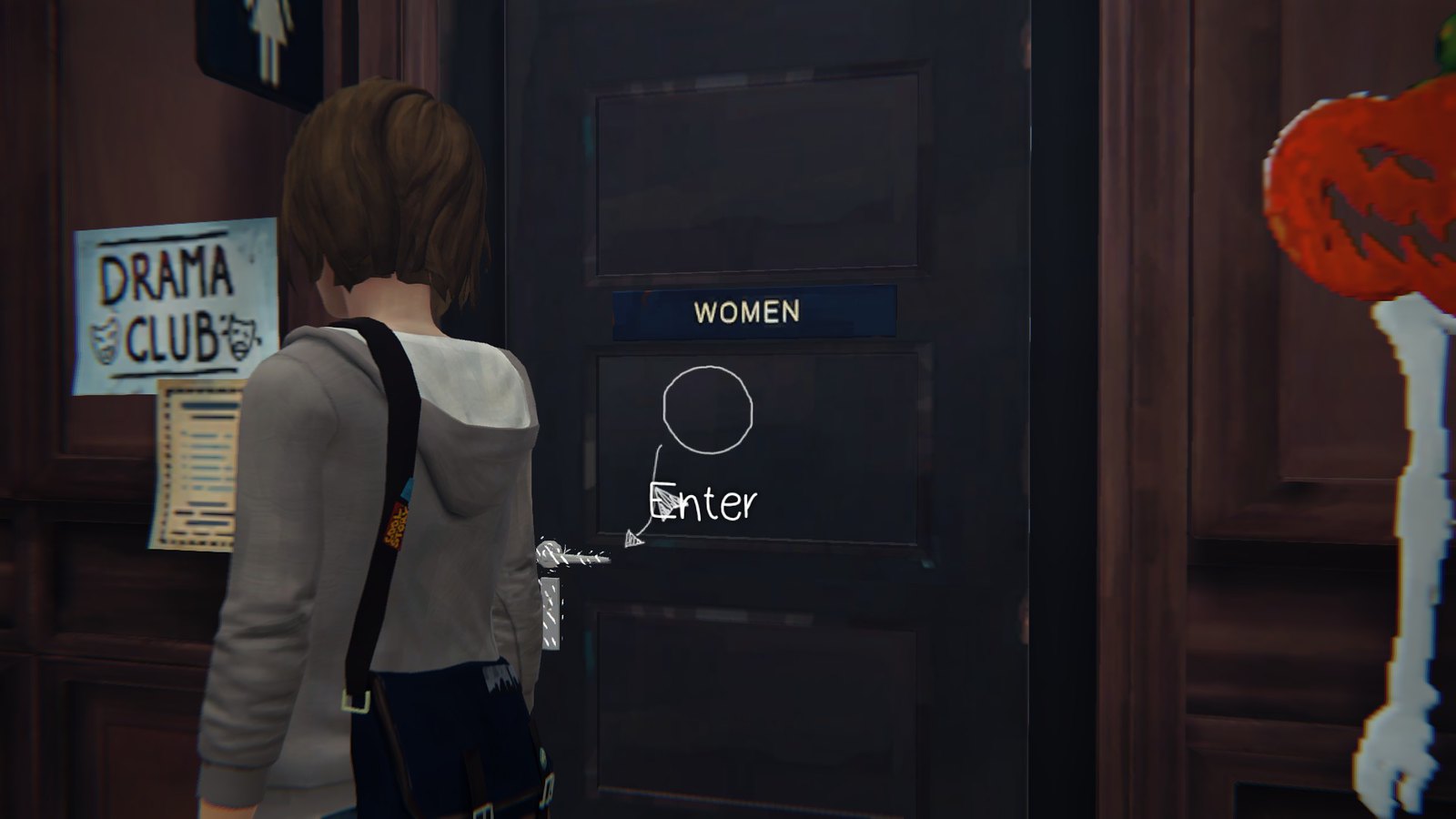 For instance, here’s you opening a door : there is a door handle but a click on it does nothing. You have to click in the circle then move your mouse to the string “Enter” you’ve read – and not follow the arrow that starts from the circle and point to the handle. Everything is confusing there: what you see and what you are supposed to do. The interface tries hard to look smart but forget she’s there not to be smart but discrete.

After fighting a bit with the interface – despite how primitive the gameplay of a point-and-click game can be, next thing you notice is the childish attitude of the main character: poor student in art-whatever wants to cry because, huh, because she’s shy, so she runs to the toilet. Sob. 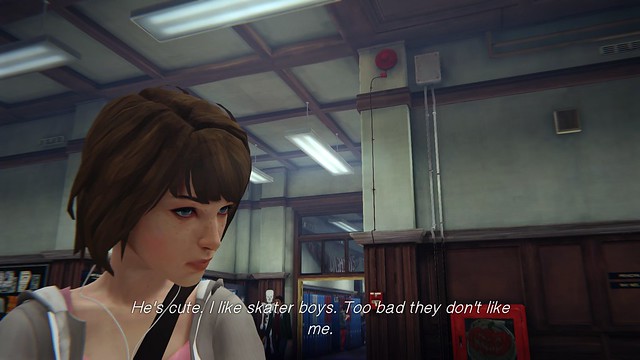 Poor girl. Skater boys dont like her. Did they made here totally ugly and not the style of skater boys? Are they having a laugh? Next character: the mall cop/university security nutcase that bullies students and wants to cameras to be installed everywhere. So unexpected!

Least to say the very first impressions of the game are not so great. Plonk then?

What about the story itself? Telltale Games have this notion that your choices tailor the game. Smart way to say that even though a game story can  branch, if there is a real story, your choices cannot change it all. DONTNOD does not tell how much you can influence the story. In Life Is Strange, you dont have to decide fast like in Telltale Games at some crucial moments: you can take as much time you want and test the alternatives before you decide. But since I’ve only played the first episode so I cannot tell really how it unfold and how much the choice you make influence the game.

I can tell however that playing the first episode in full made me acquire the rest of the season. Yes, despite the poor gameplay and simplistic characters design, I’m curious to see where it leads. I think that qualifies the story as interesting enough – at least to be bought during steam sales. Come on feet, teach yourself to move.

One thought on “Unhappy faces ain’t gonna get you in (Life Is Strange, 2015)”